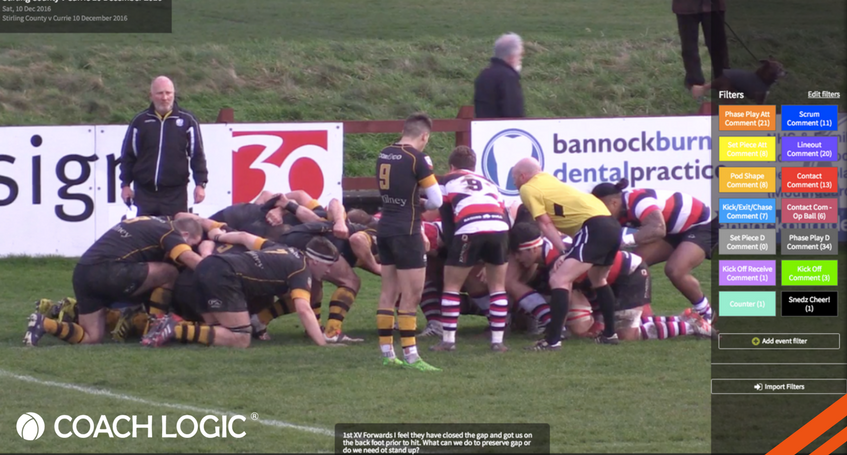 Before I continue, I would like to point you to my initial post on this topic which explains what is a pretty bold Title to this series of posts.

Over the next few weeks I will be releasing a series of blogs that will demonstrate how performance analysis can aid learning at both a player and coach level. These solutions are not complex and will certainly not require a degree to master, but hopefully they will help put performance review back into the hands of those it is intended to support.

In this post I will look at the use of Questioning within performance analysis as a starting point to a discussion that will help lead to better, player owned solutions.

The latest development at Coach Logic was the release of our App which has had a huge impact on how I deliver my feedback as a coach. Prior to this my opinion was that getting players involved in the process of performance review was about increasing the players ability to learn, implement successfully and ultimately perform.

What I didn't see coming was the positive impact it has had on my feedback and my decision making as a coach.

In the age of Google, Youtube, Blogs and other on-hand resources, we are never too far away from the solution to an existing problem. As coaches we often search the internet to get help or advice whilst neglecting your closest and most relevant source of support, YOUR TEAM!

When I say your team, I don't mean the coaching team or mentors, I mean everyone involved and most importantly I mean the players!

Being aware not to go off on too long a tangent, I would like to introduce you to Luis von Ahn, who created Captcha. I am a big fan of Luis, not because I love proving I am not a robot but because he opened my mind to a concept called ‘wisdom of the crowd’ or ‘crowdsourcing’. Check out his embedded TED talk below of which I will give a summary, before tying to find my way back to the purpose of this post!

Luis talks about how he first created Captcha simply to support internet security but started to believe this was a huge waste of time for the 200 million people proving they weren't robots, everyday. So he created Re-Captcha which gets people to digitise books. You may have noticed that you now get asked to interpret, pictures of works, a street sign or point out which pictures have fruit in them etc....

I promise I am getting there….

Based on this theory he then created a completely free language course called Duolingo where novices learned languages whilst helping to translate the web. Until this point only experts and computers had been used to help translate the web. What he found is that the combined input of millions of novices translating sentences was more accurate than an expert or computer.

So in the context of performance analysis, we are currently neglecting a whole heap of knowledge and insight. Performance analysis should not be the end point provided by a single person but the beginning of discussions that involve and pull information from the entire team.

So I tried this theory out and the results were awesome!

They can be difficult to avoid, so inevitably, here is an example of when they crept in:

My question “@1stXVForwards. I feel they have closed the gap and got us on the back foot prior to the hit. What can we do to preserve the gap or do we need to stand up?”

Response "@Mark Cairns I can definitely stand up on a few of the early scrums if I am not happy. I will remember for the future."

In this example I pretty much tell the boys what I think, which in turn gets them to focus on this and provide a way of solving what I have already deemed the problem. As you can see, the response backs up my initial analysis of the situation with no conflicting opinions or discussion.

These are definitely the best questions to be asking as it allows for discussion. The issue with asking these in a training environment is the amount of time it takes to move on. Many players also find it difficult to express themselves confidently in this environment.

For example, you ask this question during a video review session:

‘What are you seeing here guys?’

You may show the clip a couple of times and expect a player to have the confidence to contribute. What normally happens is no one contributes and you lead the group to an answer or the same players contribute every time.

During a practical training session it is even tougher to ask and get to a good answer without eventually leading the players to your answer! It also eats hugely into your limited time as a coach.

So for the reasons above, until now I have not asked many open questions. Here is what happened when I asked a VERY open question during my last analysis...

As you see from the video of this moment below, I could have jumped to a conclusion of poor technique, bad timing or the guys not listening to the call. I could have just said something like:

“This is not acceptable!”

However after resisting the initial urge to command or lead the group, I felt it better to let them explain themselves and 13 RESPONSES later we had solved the problem together. Not only had the guys taken responsibility for the solution, I actually had a better solution to the problem than I would have had if I had not engaged the players in this discussion.

NB: I have blacked out some of the answers which contain playbook calls ‍

So the takeaway for me is that if you ask open questions in an environment your players are comfortable in and with the time to replay the moment again and again, great things can happen!

The result in the next game was 100% LO success! Obviously I need to look at this longer term but I am pretty happy with the results so far. :)

The next post in this series will focus on Player Lead Analysis, and will give examples of both personal performance review and opposition preview. This will be out next Tuesday.

It would be great to hear your thoughts on the above post and if you have any examples of your own best practice please do send them on.