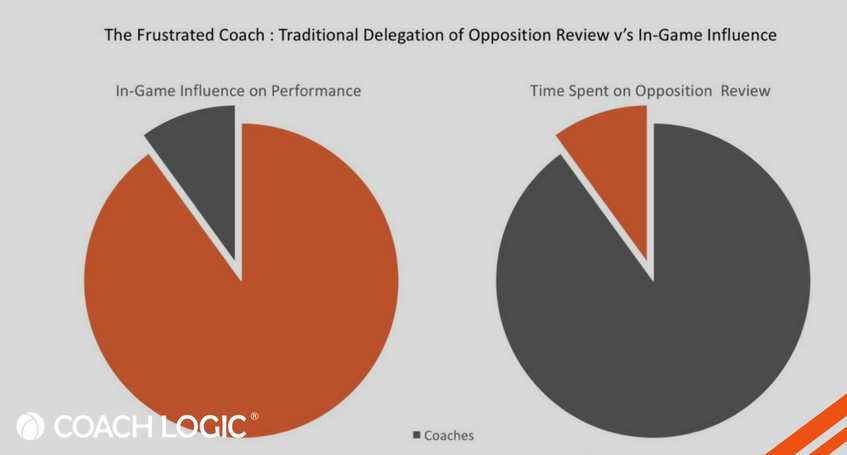 Before continuing, I would like to point you to my initial posts on this topic which explains what is a pretty bold Title to this series of posts.

First of all, I would like to apologise for the gap between this post and my last. It’s been blooming busy at Coach Logic HQ with a new Video Room due out next week and an update to the App. I am also still coaching and as most coaches around this time of year in the UK, it’s business time ..... in the season.

Back in the game…

So I have a couple of posts still to write on this series, in which I want to demonstrate how performance analysis can aid learning at both a player and coach level. These solutions are not complex and will certainly not require a degree to master, but hopefully they will help put performance review back into the hand of those it is intended to support.

Why get players involved?

….is the influence a coach can have during game time.

The traditional US sports have ear-pieces connecting the decision maker to the coach, playbooks strapped to arms, multiple timeouts and line changes. Coaches can constantly feedback to the players throughout the contest.

Sports like Football, Hockey and Rugby on the other hand have technical boxes where a coach must remain. I guess the closest the coach gets to in-game influence is via the high quality H2O distributor.

This can lead to a frustrating time, as you watch players who performed perfectly in the training environment make bad decisions and react slowly to triggers identified in the analysis.

Opposition preview is completed to give you an edge over the opposition. The traditional way of doing this is that the Coach / Analyst will look at the most recent performances of the opposition and find weaknesses and triggers that the team can exploit.

After spending the time to really understand the opposition teams systems, the Coach / Analyst then spoon feeds this information to the players in a 30 minute meeting. Fast forward two days and the coach is screaming at the side of the pitch not understanding why the players are not executing plays and picking up on those triggers and system weaknesses that were pointed out?

First thing you need to establish is how to delegate responsibility on the key areas of the game. Within a rugby context our big rocks are:

Who are your key decision makes on the field of play? After establishing the ‘big rocks’ then you need a player leader in each area and other players assigned to a specific area to support this leader.

The way I want this to work at my team is:

As it’s getting towards the end of our season, wholesale changes are not a good idea, in my opinion. I have therefore started testing the water and got some great results already.

In this example Stephen (Lineout Defence Leader) was given responsibility for tagging key lineouts and presenting on areas we could exploit as part of opposition preview.

Stephen: @1stXVForwards 3rd LO of the game and they still go for that quick ball in the middle. Make sure we’re set early and react to jump.

Stephen: @HamishBain @1stXVForwards as soon as we see Borth (black scrum cap) slip out, expect the middle man to go up front - I haven’t seen a dummy as of yet but Baino you back yourself to go up front

When it came to actually playing Watsonians (the team Stephen had completed an opposition preview on, specifically the lineouts) his observation worked out perfectly and we should have scored from the resultant steal.

And so the cycle continues…..Also an issue to address is of not finishing the opportunity.

Its early days and I need to keep working on how I delegate responsibility but so far so good. A real added benefit in creating leaders off the pitch is that we are creating players who can problem solve and not think the solution is just to work harder or shout louder. Stoppages are being used to get the leaders to feedback on their areas and the captains job is to act as chair, make final decisions and motivate.

As always I would really value any feedback on this post and if you want to contact me direct and have a chat about what you are currently doing at your club, please linkin and get in touch.

If you haven't had the chance, check out the earlier parts here: