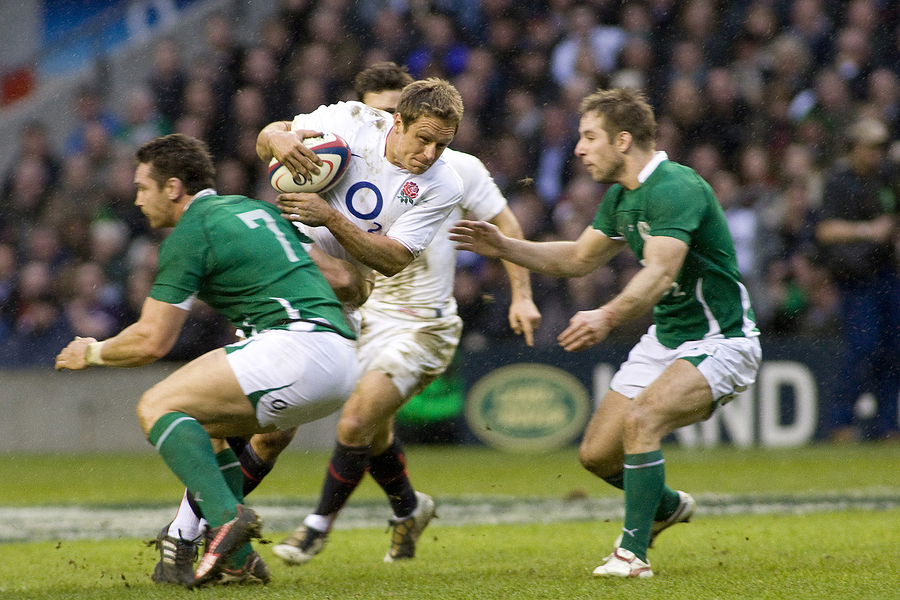 I am off to run the Barcelona Half Marathon on Sunday, can't wait! Well maybe I can a little...never run that far before, should be challenging. I suppose after playing rugby for so long, I need a challenge to keep fit and in the gym now that I am watching from the sidelines.

Back to the Rugby chat...

The reason I got into rugby was because I was inspired by the likes of Gavin Hastings, Gregor Townsend, Gary Armstrong and John Jeffrey. Oh.. I did I mention I am Scottish!

I was lucky enough to be starting my rugby pathway at the age of 7 during an era where Scotland won two 5 Nations Championships, one of which was a Grand Slam and narrowly missed out on a World Cup final. I was between the posts at the Parc de Princes when the 'Toony Flick' happened and Gavin Hasting won the game! I also remember Scott Gibbs dancing around the last defender and leaving Jenkins to slot the winning penalty for Scotland to win the last 5 Nations in 1999.

Scott Gibbs scoring for Wales to help Scotland to a 5 Nations Championship.

My childhood was full of exciting moments, I remember Thomas Castaignede for France dummying everyone, including the camera man.....I was truly inspired! I loved playing the game and wanted to emulate what I seen on the box or live at Murrayfield.

As a coach and teacher of the next generation of young players, I see a sad state of affairs where boys are more obsessed with genetics and size rather than talent and skill. It's pretty off putting for a kid who looks at his parents who are around 5ft10 and has spent the last 10 years watching matches that have been won and lost by big guys v bigger guys. I know from personal experience that the chat at development level is not about improving skill but is dominated by putting on more weight and getting stronger. I just spoke to a parent who's son has been told he needs to be 20 stone if he wants to be an international tight head. He is currently 6ft3 and around 17 stone but feels well off the mark! He's a good player as it happens, but i suppose that's secondary...

Is it any wonder that we are loosing the battle to keep our young players playing, the biggest loss comes between the ages of 16-23. Is this because players suddenly realise that they are just not big enough?

Imagine growing up in New Zealand, they were one of the smallest teams that toured the UK during the most recent Autumn internationals.


They were however the most exciting and the most successful. Is it therefore any wonder that they manage to inspire the whole country to play rugby? It's a religion over there! Any kid watching the All Blacks dreams that they will play for them one day, with the emphasis placed on skill and so every inspired kid has a chance! Yes skill is partly down to natural ability but it's far more controllable than how tall you end up! There will always be positions that require physical freaks ie Second Row but there needs to be the ability for exceptions to the rules to inspire others.

The good news is that the current generation of Scottish rugby start-ups may be inspired like I was as a kid. The last 2 rounds of the 6 Nations have been very positive for Scotland, apart from the results, and what's more the guys that are being talked about are not genetic freaks, they are talented rugby players.

Vern Cotter has made a huge impact on Scottish Rugby in a small amount of time. He has made some changes to personnel but the biggest impact has been his ability to give the players the confidence to play. He has definitely been helped out by Gregor Townsend at Glasgow who has stayed true to his 'Toonie Flip' days and created a club team capable of winning titles.

66% of the starting Scotland team tomorrow against Italy will be from Glasgow Warriors...

What's more is that this game plan makes sense! Switching from a reliance on a limited game plan with bug guys running directly and small guys kicking the leather off the ball doesn't work. If I know what's coming next watching a match from my sofa then the defences are going to have a field day. The weeks leading up to an international fixture are spent working out the opposition and forming your match strategy. A limited game plan is very predictable and so defences can close off all space and commit to the contact early and at speed.

I hear guys wondering why New Zealand have so much space to play in, it's generally thought that they are great at holding depth but I reckon it's because defences are far more passive.

Scotland are starting to develop this ability but it will take a while to change the type of player currently coming through the development system. Like I said before, for 10 years, talented kids have been giving up, uninspired and big kids have stuck with it. The current genetic pool may be great but the talent pool may be limited and the biggest impact of Vern Cotter may only come to light in 10 years time!

Its would be great to get the conversation started on this via our Twitter #CLRugby.