Keeping an Eye on the Action 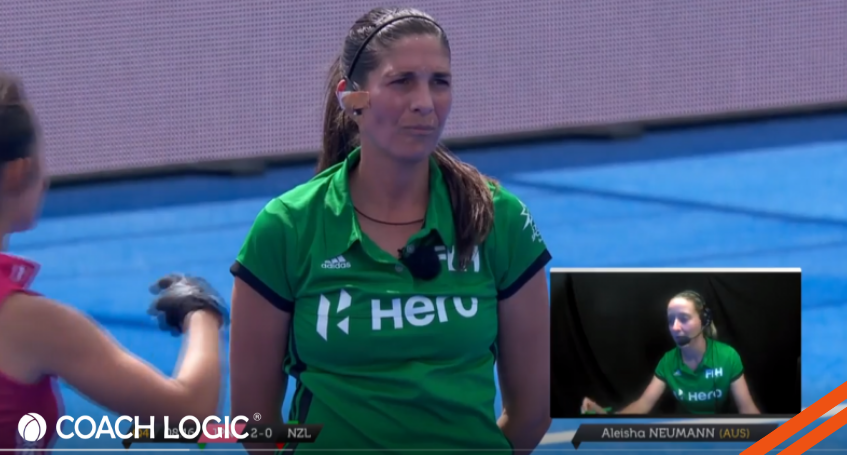 Video technology is not simply there for the players. When it comes to the use of playback, slow motion (slo-mo) and the use of different angles, then officials in many sports are fervent technology adopters.

Where football has been a little slow to get on the referral pathway to correct decision-making, rugby and hockey have been leading the way.

At the recent women’s Hockey Champions Trophy (HCT) in Changzhou, China, we met up with two hockey umpires who are getting to grips with technology after they graduated from the field of play to the video referral box.

In hockey, the video referral is used for the big decisions in the circle, usually around goal-scoring opportunities or penalty situations. On-field umpires can call as many umpire referrals as they like during a match; teams are restricted to one referral, which they get to retain if they refer correctly. The play is stopped for a referral, the umpire makes the international sign for a video referral – using his or her hands to draw an imaginary tv screen – and all eyes turn to the big screen as it replays the action. Inside the video box, the video umpire liaises with the camera crew to see the relevant piece of action from a number of angles. Speed is of the essence as breaks in play are disruptive for teams and spectators.

Emma Shelbourn is an experienced video umpire, she explains the importance of understanding the on-field umpire’s decision-making process: "When you do get a referral, you need to understand the context in which the umpire's decision has been made. For example, the umpire may have played an advantage. You need to know that as it can affect the final decision. A defending team may be calling for a foot in the circle but there had already been an earlier infringement of which the umpire was aware and she was just holding her whistle – we must know the full context of the game."

Once a referral is called, Shelbourn stresses that the first view must be in real time. That gives the video umpire an initial feel as to what the decision should be. This will be followed by viewing a number of different angles and may call for slow-mo replay. When a decision is reached, it is clearly communicated back to the umpire.

The danger, she says, is seeing a piece of action too many times, from too many angles.

“If you need to see something 15 times, then you probably are not able to call a decision,” she says. In that scenario the video umpire’s feedback would be that ‘no decision is possible’, and the umpire’s initial decision stands.

Celine Martin-Schmets is a Belgium hockey umpire who is on an upward trajectory into the elite level of international umpiring. The HCT offered her the first chance to test her skills in a new dimension, as the eyes in the sky, as the umpires like to term themselves. It was, says the umpire, quite a surreal experience: “In the video box, you feel as if you are in a bubble, shut away from all the emotion and tension that is out on the field of play.

"It is only after the decision has been made do you feel the adrenaline and the nerves kick in," she says.

The video referral has been around for nearly a decade in hockey and in that time it has become a trusted and vital tool for both the umpires and the teams.

For the players and coaching staff it offers a chance to question an often crucial decision and learning how to effectively and correctly use the referral is as much a skill as any other element of the game.

For the umpires, it is an opportunity to avoid making an error or to reinforce a decision.

Shelbourn, who represents England on the international hockey circuit, explains how the work of the umpiring team, including the video umpire, starts from well before the opening match of a competition: "Initially, when we arrive at a tournament we will meet with the video umpire coach and the umpire managers and we will have a briefing. We will watch some video clips and make decisions on those clips and we will talk about consensus and make sure we are on the same page before the tournament starts.

"Prior to the tournament starting, we have a lot of clips, which we share on a dedicated Facebook page. As a group we are constantly discussing and reviewing decisions. It is important before you arrive to know where the standards are set and what we are going to award and what we will not award."

Foresight is a valuable asset in the world of the video umpire. "Being constantly on your toes is important," says Martin-Schmets, "having an awareness of what might happen next or come up during the game helps you prepare for any eventuality."

It is also useful to have prior knowledge of the teams and the coaches and the way they approach referrals. Some teams make the decisions on the pitch, others rely on coaches' calls from the sideline. Knowing what is likely to spark a referral or when in the game it might occur is all helpful knowledge.

For this reason, the umpires will spend a lot of time reviewing previous competitions. The 'eye in the sky' always has eyes on the match, says Shelbourn. Twitter.

Language is an important consideration. Both umpires and players are expected to carry out a referral in English, so for those for who English is a second language, time and support is necessary. Martin-Schmets said one marked development in recent years has been the amount of time and practice both China and Japan have paid to getting the communications around video referral correct.

Video umpires can call up many different angles, and different cameras will provide different perspectives. A view from the centre of the goal might be used when a defender and attacker are running together for a ball; a flat, side-line camera will pick up whether the ball has gone out of the circle on a penalty corner. And then of course, there is that moment when the playback on the big screen that the players and spectators are seeing is not the same as the playback the video umpire is examining. "Yes, that is difficult," agrees Shelbourn.

"But this is when it is so important that the on-pitch umpire totally trusts the person in the box. The crowd can be shouting, the players gesticulating, but the person who is seeing every angle is your colleague in the video box."

Speak to any umpire at the top level of hockey and they will tell you that video referrals have been nothing but good for the game. Decision-making is better, umpires have become more accountable for their decisions and the players see the referral process as a fair way of getting the right decision. In addition, the availability of action clips is an invaluable tool in umpire training and ensuring that umpiring standards are as high as the matches they are officiating.