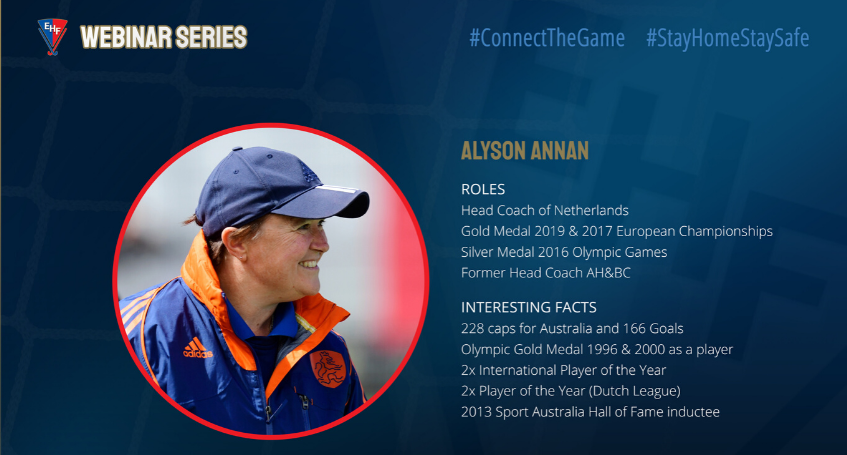 Getting into the mind of one of the world’s best coaches is a rare privilege but it is exactly what a number of people were able to do when they signed up to a Coach Logic-enabled webinar interview with the Netherland’s women’s team Head Coach Alyson Annan.

The interview was part of the EHF Webinar Series run in an exciting collaboration between the European Hockey Federation (EHF) and technology provider Coach Logic. It was hosted by Jack Rolfe, director of the Coaching Lab – a company that specialises in supporting coaches across a range of sports.

It was perhaps fitting that the interview took place on King’s Day, a national day of celebration in the Netherlands. Annan herself has recently taken Dutch citizenship and was looking forward to celebrating her new nationality, albeit in home-based and muted fashion in keeping with the Covid-19 lockdown.

For those tuning in, this was a great opportunity to listen to, and interact with, someone who has played and coached to the very highest level of the game. In the 1990s, Annan was at the heart of the unbeatable Australian team that took gold at the 1996 and 2000 Olympic Games and won the 1994 and 1998 World Cups.

These days she leads the all-conquering Netherlands women’s team who, under her leadership have won the 2018 Women’s World Cup, the inaugural FIH Pro League, the 2017 and 2019 EuroHockey Championships and the final Champions Trophy. They have also extended their position as the world number one team.

People joined the webinar – which lasted for more than 90 minutes – from all around the world, and the audience comprised coaches, players, journalists, commentators and those with a general interest in hockey.

While the conversation was hosted by the engaging Jack Rolfe, the questions came in thick and fast from the audience and Annan’s answers offered plenty of insight into both her coaching philosophy and the mechanics of coaching a group of elite players.

“A totally absorbing session and very insightful,” was the verdict of respected EHF commentator Nick Irvine, while another listener admitted that Annan’s revelation that she only spent a limited amount of time with the players had caught him completely unawares.

It was this point with which Annan started the conversation. She said the Dutch national side were already very good when she took charge, and so it was more a question of changing the small things, as the basic foundation were already in place. She added, that for her, and her team, there is always a high level of pressure to maintain winning ways.

The big surprise for many listeners was the fact that the players spend 70 per cent of their time training with their clubs, leaving Annan with only limited training time. She admitted that this was something that left her frustrated as she would like to spend more time working on behaviours, culture and attitudes – all things that call for a more concentrated period of time with the players.

“I would like the national programme to be more of a full-time programme. That would mean more access [to the players] throughout the week. I don’t mean full-time in the sense of seven days a week but I would like to access the players three or four days a week. Not just for the on-field stuff but also the behaviour side of things.”

Focus on behaviour is one of Annan’s key coaching strategies. She says she is looking to help her players become the best people they can be – not just on the hockey pitch but in their day-to-day lives as well.

“Behaviour is an instinct. It is a reaction to something but we do have the ability to change some behaviours,” she explains. “Within the game, you want the players to react to something in way that makes them perform better, the skill lies in finding out who our players are, how they react and finding a way to get the best from each individual. That takes a lot of work.”

Among the behavioural qualities that Annan looks for in her players is flexibility. By this she means an ability to change depending upon the situation. “Things change in a game. Accepting that things change and making decisions reflecting that, is important.”

This latter point is connected to a point Annan made later in the conversation regarding the “syndrome” she encountered when starting out as the Netherlands Head Coach.

“To play the way I wanted, I needed to get rid of the ‘we have never done that before’ syndrome. There were several players in the squad at that point who had been there a long time and were reluctant to change (in the short time span we had together prior to the Olympics). It was very different to the Australian way of doing things. I played under [Head Coach} Ric Charlesworth and he got us very used to trying new things. I believe that you need to go through your competitive life failing in order to be successful.”

In a wide ranging interview, Annan covered questions ranging from how early talent could be identified through to the desirability or not of 3D skills. What came across in the course of the interview was that this is a coach who is desperate to keep learning and to keep pushing boundaries.

She is currently learning Japanese and has a book in that language, plus a number of other thought-provoking books on the go. She engages with coaches from other sports as well as from within hockey. She talks in depth to umpires to understand the officlals’ perspective on the game. And she listens and learns from her players, often by simply stepping back and watching.

“I would say 70 per cent of the time my technical staff do the training and I observe. That is so I can step back and see if changes are happening. I can then give feedback.”

A concrete example of her willingness to listen and then make changes involves the time the Dutch spend in team meetings while at competitions. “We went to Hockey World League Finals in New Zealand and we were delayed on arriving at a pre-tournament competition in Australia. This was part of our build-up towards the HWL Finals. Due to jet lag, we chose not to have meetings while at the tournament in Australia. Despite this, the team played very well.

“Intuitively, as a coach you don’t want to have less time but actually we found that two periods of ten to fifteen minute meetings worked perfectly well.

“At the Champions Trophy in China we went back to longer meetings because we had a lot of new players in the squad. Half-way through the tournament we took it back to the shorter meetings. We covered the ‘essential to know’ points but we didn’t try to overload them with information. When they play, the most important thing is for the players to all to have the same information and to all interpret it in the same way.”

As a mother of two sport-minded boys herself, Annan is also keen that sport should be seen as something that is fun and enjoyable, not a chore. She doesn’t believe in children specialising in one sport early and, in fact, would like to see hockey clubs encouraging kids to be involved in a wider range of sports as well as other activities, such as playing musical instruments.

And finally to the question that probably has coaches all around the world scratching their heads: How do you keep a team that is so successful motivated and always chasing the win?

“Being number one isn’t easy, that is a lot of pressure. But the players are hungry to be there. They are very good at getting the best out of themselves at every training session and every game. My job is to compliment them when they are doing it, and remind them when they aren’t. They have created their own culture within the team that keeps them hungry. We have built an environment where they are self-critical of themselves. My job is to ensure that everyone is on the same page.”

If you enjoyed the webinar with Alyson, be sure to tune into the up-coming ones. Details Below!