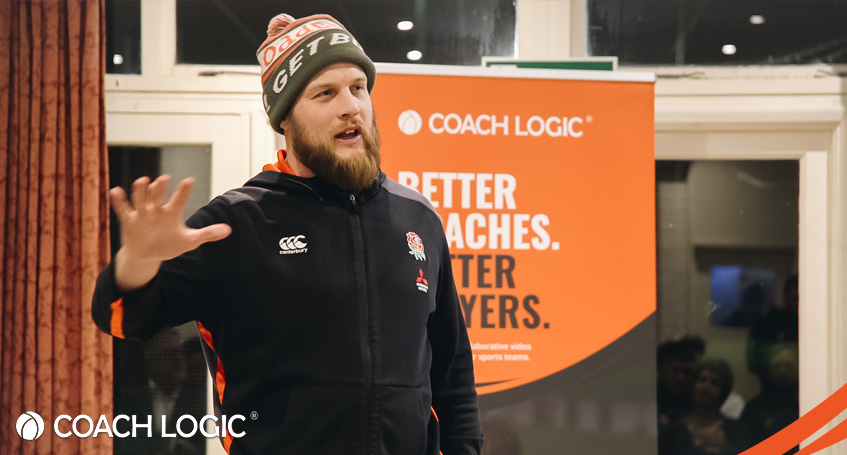 Imagine facing a squad of teenage rugby players and spending 45 minutes talking them through your analysis of their latest rugby match. There will be yawning - guaranteed.

Imagine reviewing a training session with a classroom of mixed ability footballers. They are seated in rows of chairs in a sterile classroom environment. It couldn’t be less conducive to learning.

Imagine having sheets and sheets of data that you have meticulously collected from your weekend league game but when you start talking about it to your players, you are met with blank looks at best and blatant disregard at worse. Your coaching couldn’t be less credible at that moment.

These are all areas of coach and player development that the team at Coach Logic is determined to overhaul and replace. The video analysis system, developed by Mark Cairns and Andy Muir, is borne from the hours they spent as teachers and coaches frustrated by their inability to align match analysis with the reality of what was happening on the pitch.

Since Coach Logic came into existence some six years ago, the two sports coaches – one a former teacher and one a former sports science lecturer – have sought the opinions of sports players and coaches from across team sports. The result is a performance analysis and communication system that is helping to transform coaching in rugby, football and hockey.

The over-riding message to emerge was that team players should be as engaged as the coaches in their own development. It should not be a case of the coach ‘telling’ and the players ‘doing’; for coaches and players – and hence teams – to improve, everyone needed to be involved in analysis, evaluation and application.

The gathered body of coaches heard from co-founder of Coach Logic, Mark Cairns as he demonstrated the high level of engagement of the players in his club side as they discussed game clips online after a match.

“Our problem as coaches in the past,” said Cairns...“Was that we treated players as novices. Some of them have more than 10 years’ playing experience. In any other sphere, that would make them experts.”

"We treated players as novices. Some of them have more than 10 years’ playing experience."

Cairns added that using relevant data and enabling all the players to take ownership of the analysis and evaluation mean that, as a coach, he was seeing a real return on the time investment of videoing and clipping the game. The key was providing the players with an environment in which they felt comfortable communicating. He gave the example of an 18-year-old recruit to the adult team who, through the online platform, was sharing insightful ideas that he would never normally have had the confidence to talk about with his older team mates.

Michael Ayres is a Physical and Sport Education lecturer at St Mary’s University and is responsible for the sports pedagogy modules on the University’s programme. Among his many strands of elite coaching work, Ayres is leading a group working with Leinster RFU to develop their coaching structure.

“The problem is that many people coach as they themselves were coached,” said Ayres. “Instead learning should be given its own context.”

"Learning should be given its own context."

Ayres pointed out that many national governing body coaching courses concentrated upon the tactical and technical side of coaching but neglected the emotional and cultural elements. His point was that coaching should be holistic and focused on the individual, as each individual would learn and develop differently.

This wasn’t just an intellectual argument. Ayres has spoken to a vast number of players and the emphatic response from the players was that they wanted to be stimulated to think about the game and they wanted to be treated as individuals.

“This is where Coach Logic comes into play,” said Ayres. “It provides a platform for players and coaches to discuss the match, to learn and to develop. It allows for a conversation to occur and that is important for the coach as he or she preflects and reflects upon a coaching session.”

For Ayres, a really important part of coach development was the ability to observe and be observed and then get involved in a really open, ‘sometimes brutal’ conversation about the session. “We have found that taking a conversation to a bigger audience has worked really well. It means constant review and reflection and that is vital for coach development.”

The third speaker was Russell Earnshaw, coach to the England Rugby U18 squad and a coach who always leaves his audience asking questions of themselves.

“Turn to someone you don’t know and come up with the most creative handshake possible,” was Earnshaw’s opening challenge. After some fairly impressive creativity in the room, his point was made – by setting the coach a challenge at the start of a session, a new level of creativity was released, vital if that coach was to provide equal stimulus to the players.

"By setting the coach a challenge at the start of a session, a new level of creativity was released."

The rugby coach’s challenge to data analysts was simple: “Change our view of the world.” His point was that coaches get stuck in their own way of thinking but a data analyst can provide evidence that challenges that thinking. “As a coach I might say ‘there was a lot of kicking in that game’. The data might show me that wasn’t the case.

“As a coach, an important skill is to notice, but sometimes perspective gets in the way so the data can give a different picture. I am asking data analysts to be disruptive because that will help me as a coach change my way of thinking.”

The conference provided irrefutable evidence that the face of coaching is changing. We have already seen innovative coaches such as Earnshaw, Ayres and England Hockey’s Danny Kerry, changing the way we think about coaching. To paraphrase Earnshaw: “The game will change and creative coaches will adapt. The rest will find themselves perfectly prepared for a game that no longer exists.”