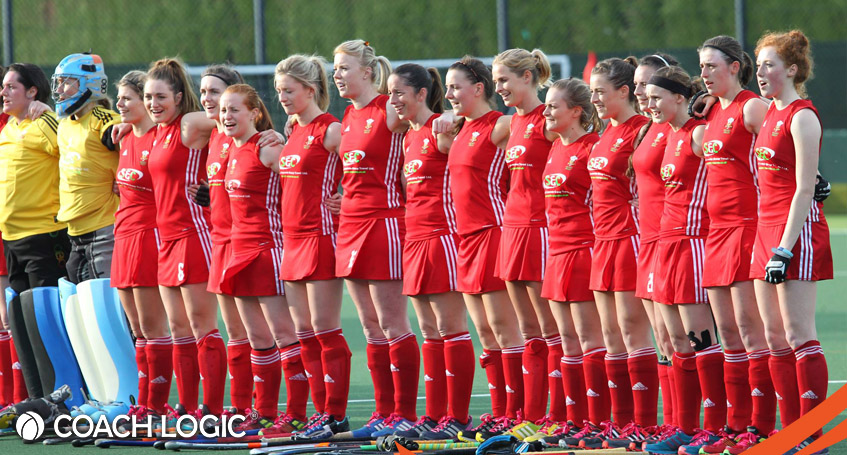 A team with a new culture and a strong identity which all the players are buying into. That's how Wales Hockey Head Coach Kevin Johnson views the women’s hockey team and it goes some way to explaining the sense of optimism that currently surrounds the camp.

Wales are heading off to Australia’s Gold Coast for the Commonwealth Games as the second lowest ranked team (26th in the FIH World rankings) but with a determination to play their own game, no matter what the opposition might throw at them. In previous editions, Wales has finished 11th (1998), 8th (2010) and 9th (2014); Johnson is not getting stuck on predictions but he is hoping his side play with confidence and courage.

“We are trying to concentrate on us, where as in the past we have thought about the opposition.”

“We are trying to concentrate on us, where as in the past we have thought about the opposition,” says Johnson. “When I came into the role as head coach, I was keen to find a Wales way of playing. That means being brave and courageous on the ball, showing better individual skills and finding better ways of doing things.”

Those might have been Johnson’s ambitions for his side but the coach, who was a teacher in an earlier incarnation, was keen that the players created their own values and culture. Luckily, the players’ aspirations matched his own.

“At our first meeting as a group I asked a simple question: ‘How have you been playing and how do you want to play?’. It was a really interesting conversation but, as a result, the group realised there were a number of things they needed to buy into for their aspirations to materialise.”

One of the first changes that Johnson made was to change the Welsh system of play. Now the squad plays in a style that suits the players within the team, rather than shoe-horning players into a system. However, for the players to reach the levels of professionalism they craved, they also needed to make changes to their own approach, so a far more intense and specific strength and conditioning schedule was introduced. The players embraced it.

“It’s not rocket science,” says Johnson. “If you have bought into something, you are far more motivated to make it work.”

"If you have bought into something, you are far more motivated to make it work."

Skills and fitness were taken care of by a new, uncompromising training regime but the other area to undergo a transformation was the players’ strategic awareness and understanding.

Again, Johnson’s training as a teacher came into play. “As a teacher I used Bloom’s Taxonomy with much of my teaching but it has transferred neatly across to high performance coaching.”

Bloom’s Taxonomy is a scale of learning which classifies learning objectives into levels of complexity and specificity. At the lower end of the scale the person learning is asked to remember, understand and apply. At the top end, the leaner is asked to analyse, evaluate and create. Johnson aims to develop a group of players who are operating at the higher order end of the scale, analysing and evaluating their performance and the performance of those around them.

This is where Coach Logic comes into play. Johnson is one of the earliest adopters of Coach Logic in a hockey environment. His club side, Holcombe, was one of the first clubs to use Coach Logic and persuading Hockey Wales to adopt the system was an easy task.

“The Performance Director at Wales was in favour because, as a squad, we don’t see each other as much as I would like to. Coach Logic allows us to do work remotely. Players can use it to add context to feedback.”

The use of video analysis has been, in Johnson’s words, “a game changer”. The players work individually or in groups to gain a far deeper understanding and appreciation of the game. The level of self-realisation among the players has risen dramatically. The result has been a noticeable shift in player accountability.

One area that Johnson highlights has been the introduction of player groups who do scouting work. Under the old system of scouting opposition, the coach or a member of the coaching team would go and watch an opponent and then report back. Using Coach Logic, the majority of that work is done by player groups. They watch matches, analyse the data and then report back to the team. It is just one way in which the players have been given a higher level of ownership within the squad.

For Johnson, the beauty of Coach Logic is that it adds context to statistics. Where coaches used to have access to pages and pages of paper-driven statistics, they now have a visual aid that allows the player to understand instantly what is being referenced. Players can look at individual performance, performance as a unit – for example a defensive corner unit – or the team as a whole and they can see how they fit into the wider context.

When it comes to selection, the Coach Logic analysis system helps make a very painful experience more palatable from both the coach and the player’s viewpoint.

“As a coach, selection is the very worst part of the job,” says Johnson with feeling. “You have all these players and they all add something and they have all made such huge commitments but you can’t pick them all. At least if you can point out some objective areas that a player can work on, then you are helping that player improve and increase her chances of selection in the future. In the past, you often went on intuition and that was hard to explain. Now you can be objective and point to evidence that backs your decision.”

"...be objective and point to evidence that backs your decision."

Video analysis also helps coaches either boost a player’s confidence or bring someone back to reality. “You can highlight things in a very objective way,” says Johnson. “Sometimes players come off the pitch thinking they have been exceptionally impactful but the reality is that they haven’t really had an impact at all. You can show them clips that proves this. Equally for someone who comes off the pitch feeling low about themselves, you can show them that, while they might not have played up to their normal standard, they did make one or two game-changing passes.”

The skill as a coach comes from knowing how best to use this huge amount of data that they have at their fingertips. For Johnson, the greater skill is helping the players use the data to help them reach a level of understanding which means they can react intelligently and autonomously to situations on the pitch.

And this is where the Commonwealth Games will provide an interesting barometer to the players’ development. Wales will be playing much higher ranked opponents and Johnson is hoping his team will be courageous enough to still keep playing the “Wales way” even if they find themselves under enormous pressure.

“We have done a lot of work on playing with the ball. I don’t know any team that likes playing hockey without having possession, so I would like to see us always trying to play our game, gaining possession of the ball and attacking. Can we continue to play bravely and not worry about the opposition? I hope so. I hope we will go out without fear and play as we want to.”

Wales will not have a lot of time to acclimatise to Commonwealth Games hockey. Their match against India is the opening game of the tournament. This is a good thing, says Johnson. “It means we will be straight into it and not sitting around getting nervous.”

Johnson is not looking ahead to results or pool placings at the Commonwealth Games. He wants his team to learn from the experience and to feel they have performed to the best of their ability. He is, however, ambitious for Wales to move up the world rankings into the top 20.

Last year, in the Hockey World League, Wales finished fourth at HWL Round Two. Over the course of that tournament they beat teams from Thailand, Kazakhstan and Singapore, showing an ability to quickly adapt to and cope with a very different style of play. In the pool games in Australia they face India, South Africa, Malaysia and England – all higher ranked but all there for the taking.

Johnson sounds quietly confident that his Wales team will perform. “Yes, when we play teams from other continents and with different tactics, we will need to think smartly. We must see how quickly we adapt to play against teams with a different style of play, that will indicate how far these players have come.”