The Importance of Goal Setting in Learning & Development 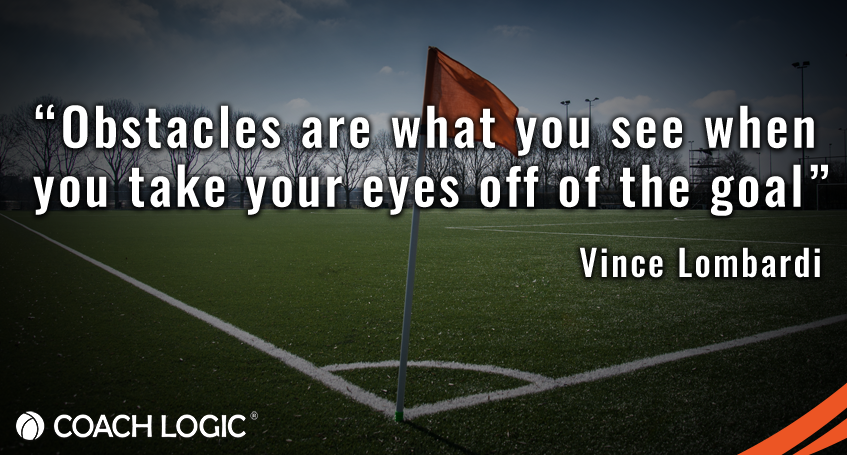 At Coach Logic, we’re committed to developing smarter players through the use of our collaborative video analysis system. Since we started more than six years ago, we’ve worked tirelessly with sports players and coaches – as well as drawing from our own experiences – to develop a system that can help transform coaching in a number of different sports.

One element of sports that our system can help make a difference in – and an area that is essential to educating and developing players – is goal setting. It doesn’t matter if you’re in the dressing room of a professional sports team before a big game, or in the port-a-cabin of an amateur set up on a windswept, rainy, Sunday morning; how you set objectives can have a real impact at any level of sport.

The theory behind goal setting works in the wider world away from sport just as effectively. Whether it’s at work, at home, in the gym or on the playing fields, people will inevitably push themselves harder to work at achieving these targets. Believe it or not, this is one of the most common psychological strategies out there, with many of us setting small innocuous milestones every day without even realising. Having goals that an individual, or a team, can aim for throughout their development can go a long way towards aiding their experience and ultimately their knowledge.

Goal setting can also work well when it comes to measuring and improving performance, and should really be present regardless of what level you are coaching at. While admittedly, the targets for a seasoned veteran will vastly differ to those set for a beginner, they will achieve the same outcome by pushing the individual on to higher relative standards.

In the pursuit of achieving optimal performance, goal setting can be one of the most important factors that you can introduce. The reason for this is because they not only teach athletes what they could achieve, but crucially it also lets them know where they currently are. However, consideration has to be given on exactly how you set goals, and what you set them for.

In a team sport in particular it can be easy for someone to compare themselves to another player, which can have negative impacts, especially if they are not on the same skill level. However, by setting individual targets, in practice and in game scenarios, goal setting can improve self-confidence by making the individual focus on themselves, rather than comparing themselves against others.

The Rule of Three

An example of an outcome goal would be winning a certain amount of games, scoring a certain amount of points or completing a certain number of tackles. Of the three, Outcome goals are perhaps the most difficult to measure and keep track of in a way that is beneficial to the individual or team. These types of goals are more difficult because they, to a certain extent, are influenced by outside factors that cannot be controlled. Sometimes you just come up against someone who is bigger, better or stronger.

Process goals are great for getting players to focus on individual aspects of their performance and can really help instil a greater sense of self-confidence. Things like adopting the same process before a set piece – expertly demonstrated by the majority of kickers in rugby – can also go a long way towards focusing attention and lowering anxiety. These types of goals deal with the technique necessary to perform well and are not subject to outside influence in the same way as outcome goals.

Like Process goals, performance goals are not affected by others and therefore are totally under the individual’s control. An example of this style would be shaving seconds off of a sprint, or lifting a certain amount of weight. This type of goal will also have an effect on the match performance of a player as they becomes fitter or stronger. This will in turn allow them to go on and compete at a higher level.

In a competitive environment, this also removes the added pressure of a player worrying about outcomes and by extension freeing them up to potentially perform better. The added bonus is that performance goals will allow players to take positives out of a game, even if they do not win it.

It’s important to keep in mind that any set targets must be relevant and achievable. Rather than setting what may seem like a mammoth task, it’s far easier the incrementally increase the target towards the same end goal. This will mean that, instead of overwhelming them, with something seems impossible, it will reassure them that nothing is out of reach.

For example, when someone starts running for the first time, you would not immediately tell them to go an run a marathon. You would start with a 5k, then 10k and so on, setting a higher goal at the completion of each previous goal. The end result is the same, but the work has been done in a manageable way that the athlete can get on board with.

Goals can also provide a good sense of direction, by telling an individual, or a team, exactly what you need to accomplish in detail. When setting goals, it is important to think about the perceived difficulty of achieving these. You want your goals to be challenging, but not impossible. But at the same time you don’t want them to be too easy. Goals need to push you, but also keep you within your limits.