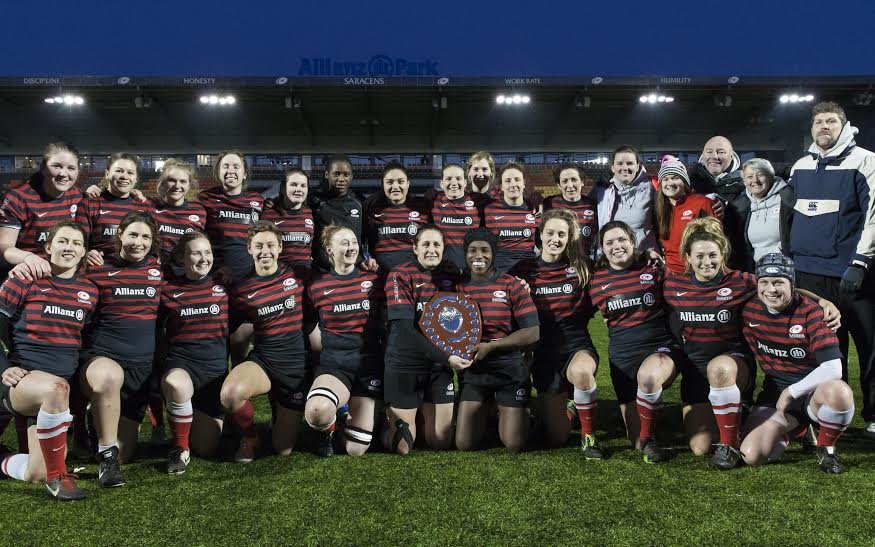 It’s been on our to-do list for a while to visit Allianz Park, Saracens' state-of-the-art playing and training facility, and catch up with players and coaches from Saracens Women RFC, current domestic League Champions and Cup Holders.

Head Coach Rob Cain, a big man in stature very much matched by passion and knowledge for the game, was first port of call. Since retiring from professional playing duties, success has been part of Rob’s short coaching journey so far, having collected silverware in both 7s and 15s.

On joining Saracens, this continued as they won the Domestic Double in his first season in 2013/14.

It would be too simplistic to say Rob’s success is down to his playing career as there is far more to his personality than the impressive frame and playing background. He’s softly-spoken and thoughtful but incredibly driven.

Rob is passionate about coaching and getting the best out of those he works with. He was keen to highlight:

England Internationalist’s Georgie Gulliver and Sonia Green also chatted and gave great player insight on Saracens, Women’s Rugby and Coach Logic.  It was clear how motivated and aspirational they are and they spoke with refreshing honesty throughout.

Although Saracens Women are Amateur by status it’s apparent that they’re very much professional in mindset. They’re hopeful the Premiership will bring the status to match the mindset soon – with Saracens as the leading lights.

Sarries’ has a family ethos that underpins their approach as a club with Rob echoing this and stating the main qualities he looks for are honesty and great work ethic.

They all agreed that communication and interaction between coaches and players – always a challenge in an amateur environment – is vital for raising standards and building a strong culture, which is made easier by Coach Logic.

Rob, Georgie and Sonia acknowledged the power of video analysis in raising both coaching and playing standards. Georgie went onto explain that many girls haven’t played rugby since they were four of five years old so watching rugby, especially their own performances, helps with learning and development.

Rob also explained a big challenge to overcome is how coaching can be guilty of too much commanding and not enough freedom for players to make decisions and feel trusted in making them.  The context video provides can prove invaluable in accelerating learning and improved decision making.

Women’s rugby in England is clearly moving in the right direction with Saracens very much at the forefront. It is an exciting phase with all agreeing the growth will be helped by continued good practises and new innovations.